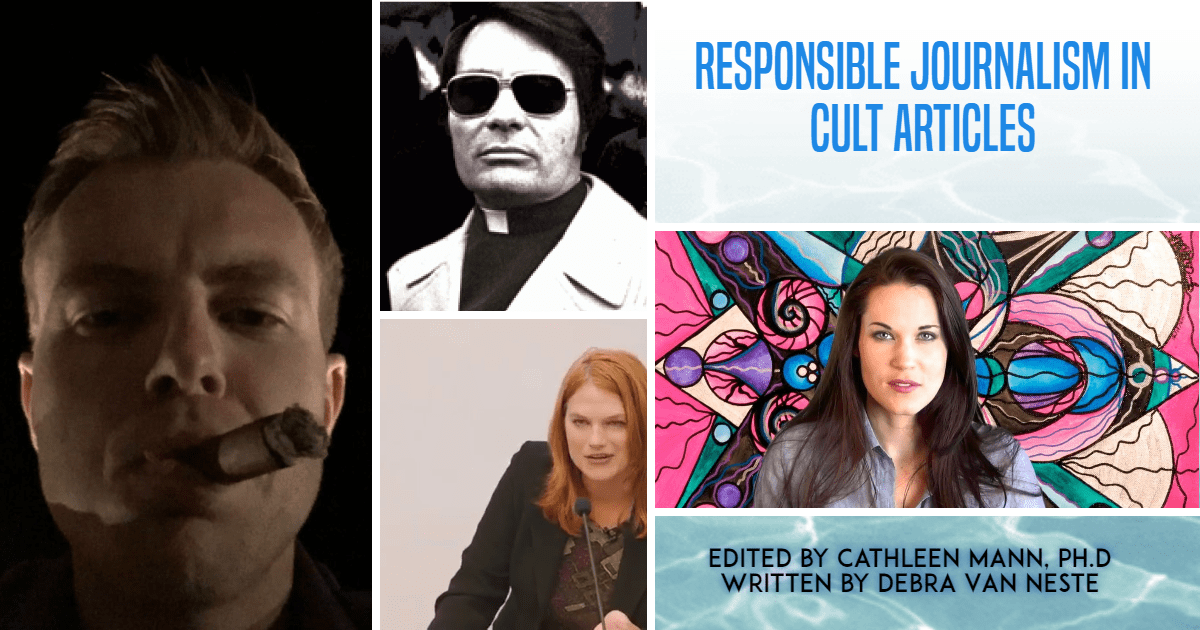 Part two of a continuing series

There has been a lot of sensationalistic articles on cult leaders showing up recently. Do they do more harm than good? Such articles focus on beliefs and biased judgment, such as the way a leader dresses, if a cult leader is “sexy” or smokes cigars, wears Gucci, or similar. Because the writer ostensibly seeks notoriety, they seem to step on everything. Mostly, they do not demonstrate the responsible need to cite and reference source material properly. Some even blatantly plagiarize from people who have done the hard work of research. They also contain so much bias that it can’t be taken seriously.

We have decided to be more careful on our pages, and not promote sensationalistic articles that make us look as bad as the cult leader does. Some articles reinforce bad practices by some writers. When you go up against potential cult leaders with hoards of followers and millions of dollars, there has to be a different approach and that is a fact-based, fully referenced article.

When a piece is done and professionally cited, and is not a “hit piece,” it doesn’t need tabloid coverage. A tabloid would not be interested in something educational and factual.

People love excitement. Cults are very dangerous and when you don’t act carefully, and just bash, you might temporarily create interest. But this fades. Nothing has really been accomplished.

What is advocacy? Is it empty criticism? Or is it a responsibility to the truth? It is to honestly educate others. To know your readership; to guide into informed options that will help and heal. Or is it all about actively seeking praise and a following?

From Bentinho being compared to cult leader Jim Jones, and so-called “skeptics” interviewing former cult leaders who are still “cult leaders” and other harmful acts, what has been accomplished? Can anyone with no credentials and no understanding of being in a cult, write whatever they want? Can they use whatever perspective they want? Is that advocacy or responsible activism?

Being an anti-cult advocate might invite condemnation or criticism. But fake opportunists swooping in acting like activists does not impress. Get in the trenches, dear one, this is not a tabloid topic.

Part one can be read here: